Roll over image to zoom in
Click to open expanded view

David McGriffy has been a programmer since the earliest days of the personal computer. He has piloted both radio-controlled and human-carrying aircraft, including gliders of both sorts. He worked on GPS systems before they had even finished launching all the satellites. He’s written embedded systems code for top computer companies and for fun. He has traveled the world to do failure-mode analyses on the control systems of offshore oil rigs and is an inventor on a patent for a vibration analysis system. He is an expert on website performance and has been published by IEEE on the subject. David runs an audio software company, VVAudio, which produces plugins for surround sound and virtual reality. He has a Ph.D. in Physics from the University of Texas at Austin.

There are no reviews yet. 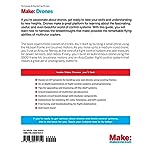